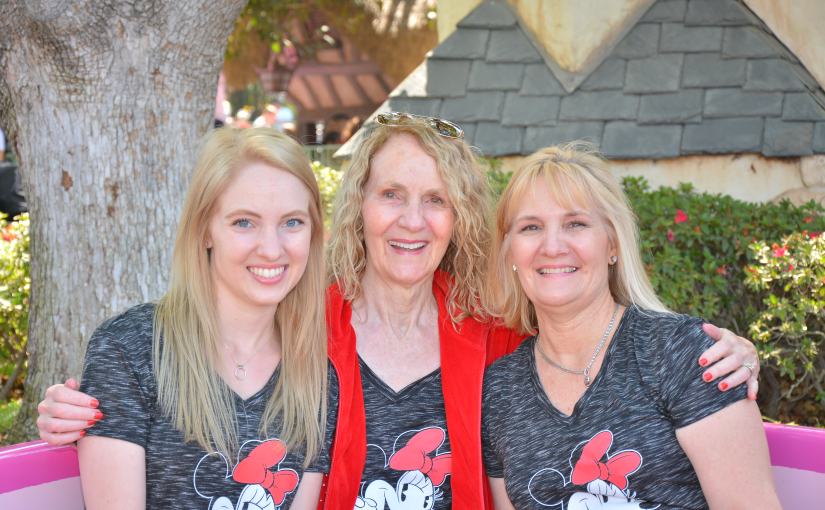 When I moved back to California, I wanted to have more time for Disney trips, so I made it. The more I shared my adventures with my grandma, supplemented by my mom’s experiences in the park, the more vocal grandma got about wanting to go to Disneyland herself. In 2017 we decided that we would take her for her 80th birthday that was in August of that year.

Unfortunately, that fall stayed too hot, and by the time it cooled down enough for us to be comfortable taking her, the holiday madness in the parks started. With that, we decided to make the trip in the spring. We opted for the period of time after spring breaks ended and before Grad Nite season started. This meant our trip would have to take place in the last two weeks of April.

In planning this trip, we decided that we would dedicate Monday to driving down, Tuesday and Wednesday to being in the parks, and that Thursday would be for driving home. We also went into the trip with a list of pictures we knew we wanted, food we wanted to try, and rides that were important. We are proud to say we accomplished everything on our lists!

My mom and I picked up grandma at her house just before 10 a.m. on Monday, April 23rd. From there, we made our trek down to Anaheim. Quite a few stops were made along the way, and we finally made it down to the hotel just before 3 p.m.

For this trip with grandma, we decided to really splurge and stay at the Grand Californian – proximity to the parks, bell/valet services, room service, and amenities played a big role in our decision here. Of the Disneyland Resort hotels, this one truly is my favorite.. since the room renovations, the showers are to die for!

Once we got settled in the room, the three of us went into Downtown Disney for dinner. We made our own “family style” experience at La Brea Bakery, and it was just the right amount for each of us.

From dinner, we made our way through Downtown, pausing to go into some of the shops. We made it to the other end and found our next destination: Trader Sam’s.

Despite it being around 6:30 or so, we lucked into a table inside! This meant grandma got to experience the activities that accompany some of the drinks (for those who are unfamiliar, this includes brief changes in lighting, yelling by the bartenders, and other special effects).

When we left Trader Sam’s, my mom wanted to go into the lobby of the Disneyland Hotel to see their teacup chairs. This was a brief detour because by this point we were all very tired from the traveling of the day. We made it to the room and called it a night shortly after.

The next morning we all got up early and started getting ready while we waited for room service to arrive. During our trip the parks closed a little earlier and opened a little later – this kept us from having to rush ourselves and grandma first thing in the morning, and kept us from staying in the parks too late.

We were at the entrance to Disneyland about a half an hour before the park officially opened. After getting through the gates, we took advantage of the fact that the park wasn’t technically open yet and wandered through the Emporium that sits on the corner near the City Hall at the start of Main Street.

After stopping to look in the shop, we made our way down Main Street to get castle pictures before it got crowded. 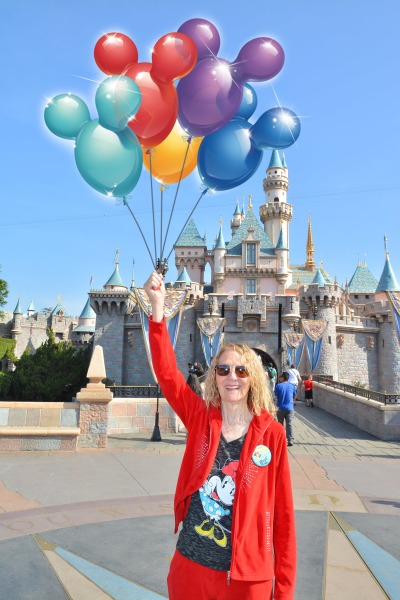 We crossed the bridge into Fantasyland and went to Snow White’s Scary Adventures. When we finished there, we decided to move on to the Mad Tea Party, which grandma got a kick out of!

When we finished our spin on the teacups, grandma expressed interest in the Matterhorn, and after mom and I weighed the pros and cons (i.e. how jerky it is, the lack of real padding, etc.) we decided to get in line. 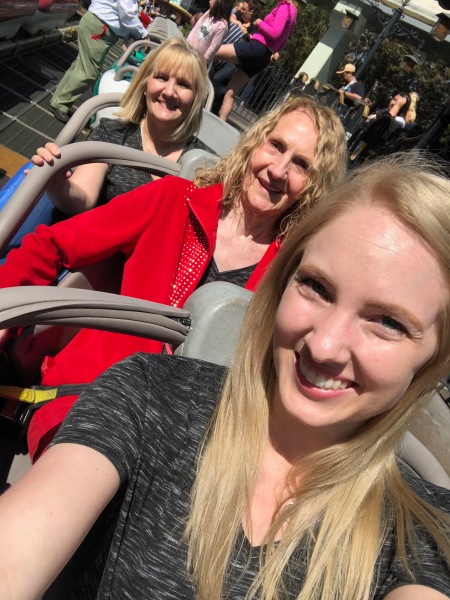 She ended up liking that one too!

When we were done there, mom wanted one of the chocolate churros that are a limited feature for Pixar Fest inspired by Coco (which I still haven’t seen), so we stopped at the churro cart in Frontierland. Once the churros were consumed, we went to Adventureland to do the Jungle Cruise.

Following the cruise, we made our way through New Orleans Square. While walking through the square, we witnessed a proposal at one of the caricature stands, which was adorable! Once we had passed through, grandma and I made our way to Haunted Mansion while mom waited elsewhere. When the ride was done, we met with mom where I waited in line for one of those Toy Story Alien popcorn buckets.

That day we had reservations at Carnation Cafe for lunch, which was phenomenal! From there, we headed across Main Street to the silhouette shop.

The silhouettes at Disneyland have to be one of my favorite souvenirs, and I’m so glad my mom brought up wanting to do one while we were in the parks with grandma.

It had been a long day already, so we started our trek to the hotel so that at the very least, grandma could have some down time. On our way back to our hotel, we stopped in World of Disney, followed by the Starbucks Reserve in Downtown.

Once we got grandma back into the hotel room, I decided to look at ride wait times for some of the more intense rides that were not a particularly great idea to try and take grandma on. At that point in time, the wait time for Guardians of the Galaxy was allegedly only 45 minutes. I decided I was going to go, and I knew mom wanted to as well, so we left grandma to rest and wandered into the park (which was particularly convenient coming from the Grand Californian).

Turns out the wait time was closer to 90 minutes, which was okay overall because grandma got to really rest. When we finally got through the ride, we made our way back to the hotel room to pick up grandma so we could head back into California Adventure with her.

Our first ride stop when we were back into the park was the Little Mermaid ride. After that, we decided to take grandma on the Silly Symphony Swings. She LOVED those – they would end up being the only repeat ride with grandma the whole trip.

From the swings, we moved on to Cars Land as it was nearing dusk. The only ride we did in Cars Land that day was Luigi’s Rollickin’ Roadsters. After our ride, mom wanted a Neapolitan shake from Flo’s V8 Cafe. We walked through Cars Land with the lights on, and I made sure we walked around the back side of Flo’s toward the wharf so that grandma could see they way that the Cadillac Range gets lit up at night (a personal favorite of mine).

We got back to the hotel relatively early that night, which was good because it was a long day. According to my phone, we had walked just over 5 miles that day.

Day 2 of fun in the parks started similarly to day 1 in that we got room service and went to Disneyland first. We only had one objective for that park when they opened at 9 a.m. – get a picture with the Mickey flowers in front of the train station.

After we got our picture, we hit California Adventure. Once through the park gates, I took our park tickets and got FastPasses for Radiator Springs Racers while mom and grandma took their time walking up Buena Vista Street. From there, they met me at the entrance to Cars Land so we could get a picture with the Buzz and Woody cars by the “Welcome” sign.

With our picture taken care of we made our way to Toy Story Midway Mania, which only had a 5 minute wait time. Once that ride was marked off the list, we made our way back around the pier the long way (construction is still heavily underway) to the swings so grandma could ride them again.

Mom and grandma went on their way to do Soarin’ and I made my way to the Starbucks location in the park. When we met back up, we headed towards Hollywood Land. On our way to our next destination, we took a little detour to take a picture by a mosaic wall near Schmoozies, ride Mike and Sulley to the Rescue (a ride mom and I had never been on) because grandma likes Monsters Inc, and to grab a hot dog.

Around that time was our return time for our Radiator Springs Racers FastPasses, so we made our way there through Bug’s Land so that grandma could experience that. Mom and I also paused to get FastPasses for a second round of Guardians later that afternoon. Following our race, I wandered to the Cozy Cone for a bacon mac & cheese cone and my mom went back to Flo’s for another Neapolitan shake which grandma had a little bit of.

At that point, we had finished most of what we wanted to do in California Adventure, so we headed back across the plaza to Disneyland. Our first order of business in the park was to take the railroad on a round trip. Once we made it back, we walked up main street and got pictures in our Minnie ears with the “Partners” statue.

That day was particularly warm, so we made our way towards Adventureland to get some Dole Whip and sit through a Tiki Room show. After the show we walked across the park to the Monorail. We rode the Monorail to Downtown Disney, and made a stop in the new Disney Home Store as we made our way from the station to the hotel.

With grandma at the hotel to rest once more, mom and I made our way back to California Adventure for our Guardians FastPass return. After the ride we got back to the hotel (much faster than the day before) and gathered grandma to get dinner.

We walked back to the park entrance of Disneyland and jumped on the train for a 3/4 trip to Tomorrowland. Dinner was at Pizza Planet (which is fantastic rebranding in my opinion) where mom got pasta and grandma and I got slices of pizza. Mom also got one of the Alien macaroons. After dinner, we got back on the train to go to Main Street and head back to the hotel. 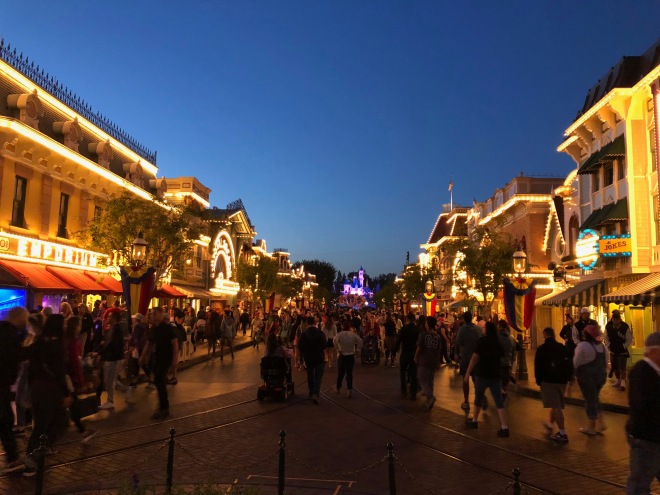 Based on my phone’s tracker, we walked just over 6 miles the second in-park day of our trip.

We had room service delivered Thursday morning before we left and were thankful for bell services to help us get our stuff back down to the car. As might be anticipated with typical LA traffic, it took us an hour and a half to get the 30 miles from Anaheim to Downtown LA. We ended up making it home in just about 5 hours.

We all had a great trip to Disneyland, and I’m so grateful that I have those memories with my mom and grandma!

One thought on “Disneyland for Grandma’s 80th Birthday”