Hi, I’m Brittany, and I’m a Disney Addict. *Hi Brittany!* Some of my earliest memories consist of sitting on the floor in front of the television in my living room watching The Little Mermaid until I literally wore out the VHS tape. I was a touch obsessed.

I used to go to Disneyland more frequently than I do now. Usually, I go with my family. (Fascinating tidbit: one of our past family trips was actually planned for us to arrive September 11, 2001, but for obvious reasons we didn’t go and got the trip refunded.) Over the years various friends have gone with us, been there at the same time, or have been working there, and as such have joined in on the adventure. Though, 3 of the 4 trips I currently have “planned” are with friends.

This trip was different from past trips for a few reasons. For my mom, it served as a birthday present and a more than deserved vacation for her after taking care of my couch-bound father for 4 months. Another purpose was to celebrate my college graduation. It was also the first trip to The Happiest Place On Earth we took without at least my dad and brother. As such, we wanted to make sure we took the time to do a lot of things we hadn’t done before.

We got to Anaheim around 11 a.m. where we checked in to Disney’s Grand Californian Hotel and Spa. Once our stuff was unpacked, we walked through Downtown Disney, looked in some shops, and had nachos at Tortilla Jo’s before heading towards the Disneyland Hotel.

At the recommendation of the internet and friends who were at Disneyland the week before us, we went to Trader Sam’s which is located between the pool for the Disneyland Hotel and the hotel’s Rose Garden.

Imagine that the Tiki Room replaced the music for alcohol and chanting – that is Trader Sam’s. They also serve food and non-alcoholic beverages, and have both indoor and outdoor table service.

We decided to order an Uh-oA! which they recommend only be ordered by 2+ people (rightfully so, I might add) and they light on fire once they deliver it to your table. 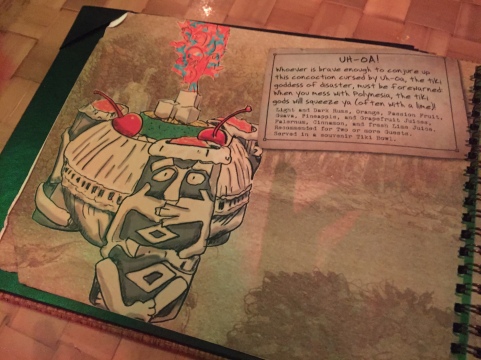 After partaking in things that angered the tiki gods (or so we were told), we went to the Steakhouse 55 lounge and had lobster sliders for dinner. Shameful admission: I was in bed by 7:30 p.m. that night.

My mom and I started our morning with a 6 a.m. power walk through California Adventure. As early as it was, I really liked it because it was a completely different way of experiencing the park. The 2 mile walk was a loop from the park entrance inside the Grand Californian that went through most of the park. As we walked through, we saw the workers power-washing the walkways, performing maintenance, and trucks delivering things throughout the park. After seeing the work that goes into preparing the park for opening, I have a renewed appreciation for the hard work behind the magic of Disney.

Once the parks were officially open, we headed over to Disneyland. Since it was just the two of us, we spent a little bit of time wandering through the stores. We then made our way to the Jungle Cruise and Indiana Jones before getting Castle pictures.

After Sleeping Beauty’s Castle, we made our way to Hyperspace Mountain, followed by  mac & cheese hot dogs (shame, shame, shame *ding-ding-ding*). Round 1 of Thunder Mountain concluded the morning in Disneyland.

The afternoon started in California Adventure where we looked in shops and went to the Cove Bar.

My mom and I decided to split an order of Lobster Nachos and a Funwheel (it starts off being about 4 different colors.. I had started mixing it before the picture was taken), both of which I would recommend 10/10.

When the evening rolled around, we headed back to Disneyland for some rides and Dole Whip, then crossed back over to California Adventure for Tower of Terror and Soarin’.

Park day 2 started off with a churro on Main Street (believe it or not, I only had 2 the whole trip). Our first stop was Fantasyland and then we moved to Toontown, followed by the Matterhorn.

For lunch, I met my dear friend, king, and favorite Disney employee Paul at the Jolly Holiday Bakery Cafe. I must say, the people watching in this part of the park is PRIME.

Later that afternoon, my mom and I went back to Trader Sam’s. This trip, we sat outside and got a Piranha Pool, which was a far more reasonable drink for people who want to be a functioning park guest for the remainder of that day. When we returned to the parks, the rides included Radiator Springs Racers, Luigi’s Rollickin’ Roadsters (which were ADORABLE), The Little Mermaid, Tower of Terror, Thunder Mountain, and Hyperspace Mountain.

On our last day we used the Magic Morning we had to go into California Adventure before park open. We beat the crowds to Toy Story Midway Mania (151,000+ points for me!) and a second round of Soarin’ which was followed by a collection of repeat rides once the park was fully open.

I met a friend from high school who has since moved to the LA area at the La Brea Bakery for brunch in Downtown. After that, my mom and I returned to Disneyland for more rides, shopping, and pictures.

The late afternoon was spent in California Adventure doing a few more rounds of some of the previously mentioned rides, which was followed by dinner at the Storyteller’s Cafe in the Grand Californian. We returned to DCA after dinner to ride the trolley and Tower of Terror in it’s current state one final time before heading back to Disneyland for a last call on purchases and rides.

Looking back at everything we did, I realize we did a LOT of park-hopping. We didn’t go on as many rides as we might “normally” have, but we experienced other things the parks and park property had to offer. On this trip I did realize that I am getting too old to have 3 full days in the park, as my joints and muscles are still on strike.

Side Note 1: Throughout the park they had set up some really cute 60th Anniversary photo spots for some of the more iconic attractions that I honestly wish were up for more than just the occasion. 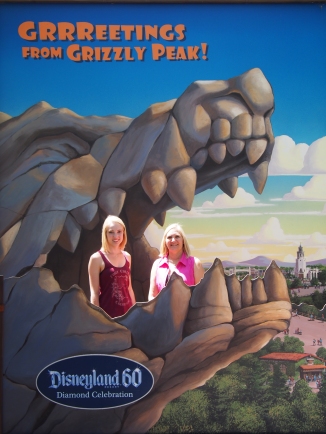 Side Note 2: While the re-theming of Tower of Terror is something that I am not personally thrilled about, it caused me to take some time to look at the little details of the current facade before they go away. For a number of reasons, I thought it was fitting that I found this sign on the upper level.